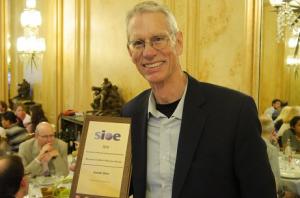 This year’s Douglass C. North Research Award was presented at the annual meeting at Sciences Po in Paris to Josiah Ober of Stanford University for The Rise and Fall of Classical Greece (Princeton University Press, 2015).

The book shows that, contrary to longstanding conventional wisdom, classical Greece flourished economically as well as intellectually and artistically. Ober then provides a fascinating institutional analysis of classical Greece to explain its exceptional flourishing, based on relatively fair rules, capital investment, and low transaction costs on the one hand and competition, innovation, and rational cooperation on the other. The second half of the book presents Greek history from 800 to 300 BC through this lens. The book is innovative, creative, full of surprises – and a great read. I would also like to note that Josh participated in a terrific panel at this year’s SIOE on Ancient Greece, and the prospects for institutional analysis of the ancient world have never been better.

The North Award is offered every two years for “the best research in institutional and organizational economics published during the previous two years.” This is the first North Award since Doug North’s death last year, and I believe that Doug would be thrilled at this outstanding work on Classical Greece and its importance to SIOE.