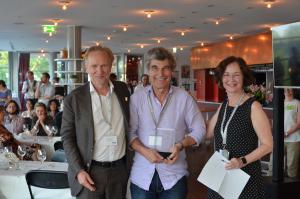 Background: The Oliver Williamson Best Conference Paper Award is open to all papers accepted for presentation and given at SIOE’s annual meeting. A sub-group of members of the Program Committee, chosen by the program chair Tore Ellingsen, shortlisted a small set of papers. The winner was chosen from the shortlist by a committee comprised of the current president (myself), the president-elect and organizer of the conference (Tore Ellingsen) and the incoming president elect and organizer of next year’s conference, Bob Gibbons. The award was first awarded in 2014 and is given every year.

The paper: The authors study the politicians and voters of Sweden’s Radical Right. The rise of the Sweden Democrats is descriptively linked to macroeconomic events that magnified job insecurity and stagnated disposable incomes in large segments of the labor market. Negatively impacted groups entered politics to build the Sweden Democrats, and voting for the party is concentrated in localities suffering larger impacts. Survey data suggest that economic anxiety may have triggered radical-right mobilization by weakening social and institutional trust among those with antiimmigrant preferences. The authors characterize the Sweden Democrats as a citizen-candidate movement that channeled inexperienced citizens from negatively impacted groups into politics. The party’s entry shifted political selection for soft and hard valence traits in a negative direction.

Comment from the reviewers: In this paper, a supply side (who becomes a politician) as well as a demand side (how are attitudes translated into votes) are combined convincingly. Furthermore, there is an interesting mechanism involving diminished trust in government, thus reducing the ability of parties to make relevant promises (and to appear credible). Timely, topical, and insightful!